Appropriate and expressive gestures enhance engagement, but repetitive gestures are distracting.  Fidgety gestures indicate a lack of self-confidence, and exaggerated gestures make the speaker appear out of control.

Here are five guidelines to using gestures to your advantage:

Remember to keep scale appropriate. If you are giving a speech in a hall with two balconies, grand gestures are OK. But in a small room or – worse – on television, expansive movement appears manic. Have a colleague stand where you will be stationed and then you scope out the venue. You’ll get an idea how much movement is needed. If you’re performing on video, find out what the standard shots will be and adjust your movements accordingly. In general, less – much less – is more when it comes to televised gestures.

Be careful of mannerisms. I used to have a professor who would punctuate each and every sentence with a palsied karate chop. We would imitate him in class, in the hall, and at frat parties. Don’t be that guy. A distinctive gesture is fine – in fact, you might want to develop one as a trademark – but when it is overused the gesture becomes distracting at best and fodder for ridicule at worst.

Along the same lines, make sure gestures have purposes. If you want to stab a finger at the audience to make an appropriate point (“and you have been cheated time and time again by this insane policy…”) that’s fine. But if the gesture habitually persists through a joke or a tribute to a fallen friend, you are sending mixed and confusing signals. This might actually be a bigger problem than you suspect, because sometimes people subconsciously read things into inappropriate gestures, and they may not even be aware of their reaction; all they know is that something is wrong. I once knew someone who kept his fists clenched during even the lightest parts of his presentations. I don’t know if the mismatched gesture was symptomatic of anything, and it took me a while to figure out what the dissonance in his appearance was, but I believe his habit made people uneasy in general even if they could not put their fingers on what was bothering them.

Maintain an arsenal of functional and appropriate gestures. Two that work well are:

1) hands in front of body and spread, palms out, when addressing the audience, and

2)palms turned in when talking about yourself. I like listing points from time to time, and using fingers to count them out.

Just don’t use this technique for eleven or more points. Some speaking coaches advise against using clenched fists or pointed fingers, but if those gestures are used with sincerity and not in a hostile way, they can be very effective. An arm outreached to the audience in a gesture that looks like you are inviting someone to dance is an excellent device to implore listeners to join you in a belief or idea.

Full-body gestures, when appropriate for the venue, work well. For example, if you want to make a final appeal to the audience, get out from behind the lectern, move to the edge of the stage, and use the come-and-dance gesture with one arm while holding the microphone in the other hand. If you are wearing a microphone and are not tethered to one location, moving around the stage or platform is an excellent option as long as you don’t pace mechanically. If you are comfortable doing so, opt for a location that does not plant you behind a lectern; it’s just one more barrier between you and the audience. If you have notes but no formal lectern, you can put them on a music stand and refer to them occasionally. I believe that one of the most physically inviting setups for a speaker is a simple stool, a music stand, and a hand-held mic. It communicates to the audience that you are not afraid of them and not desirous of a barrier and allows you the freedom to sit and then stand when you want to punctuate an idea.

For more, please check out my latest book, Present Like a Pro: 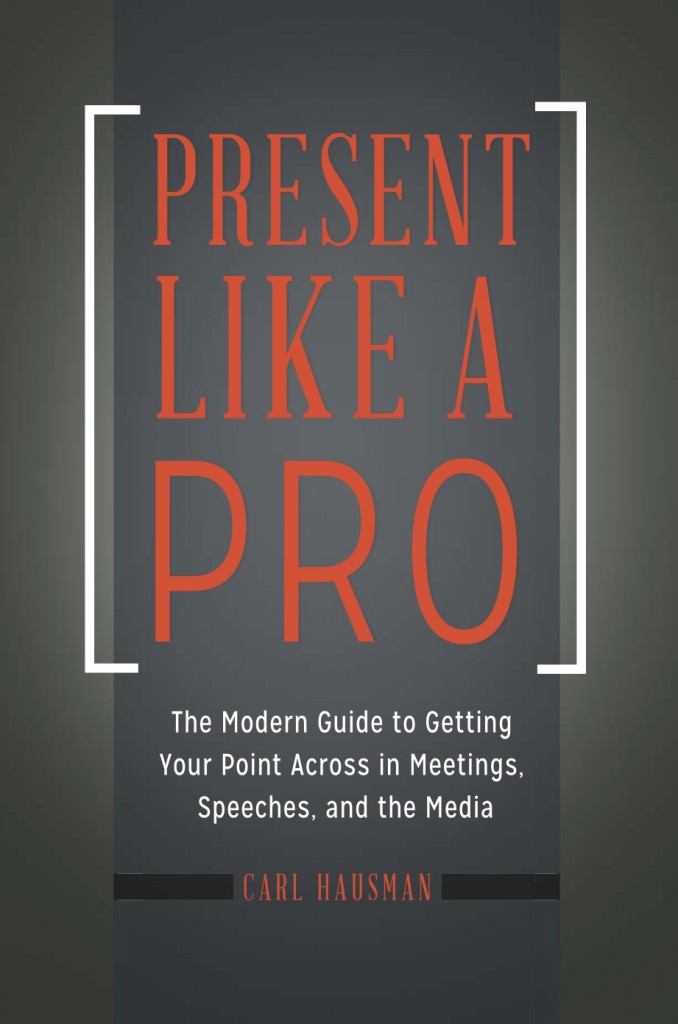 Carl Hausman is Professor of Journalism at Rowan University, the author of several books about media, and a commentator about the role of media and ethics in civic life. View all posts by admin

Write Like a Pro - A straightforward, no-B.S. guide to mastering the art of eloquence. Published by Praeger. Order the book here.

And Recently Published...Present Like a Pro - Techniques you can use right now to add a professional polish to your presentations. Published by Praeger. Order the book here.